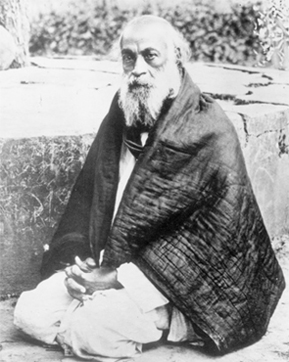 All yoga masters are unique in their own ways. Many have colorful backgrounds with interesting stories. Some are miracle workers. Others speak and write with profound wisdom that lasts for generations. As true Gurus, these masters lead their disciples along the path to enlightenment.

But no one knows how many disciples have themselves become masters. They live in the shadows of their Gurus, blending into the background. This is the case with Mahendra Nath Gupta, known simply as “M.”

Born in India in 1854, M. had a sweet and gentle nature. From early childhood, he had religious and mystical inclinations. He enjoyed watching rituals and joining religious festivals. M. had an appetite and capacity for knowledge, excelling in school and studying a wide range of subjects. These included several languages and philosophies. As a young adult M. was hired as headmaster of a prestigious school.

From age thirteen, M. kept a diary. He was a keen observer. The habit of journaling led to his greatest lifetime accomplishment: the publication of his master’s teachings, The Gospel of Sri Ramakrishna (aff link).

When M. married at nineteen, his wife joined the family unit. This was the custom during that time and is sometimes still practiced today. The bride moves into the husband’s parental household. The combination of different personalities isn’t always harmonious, and this was the situation with M.’s family. As a quiet, contemplative man, M. found family clashes unbearable. He began to feel that his only option was suicide.

M. was in this desperate state of mind when his fortune turned. He was invited by a relative to visit a local holy man, Śrī Ramakrishna. M. approached his future Guru with sincere interest in spiritual truth. He was then twenty-eight years old. M. was intrigued by Ramakrishna, who seemed like a simple priest, yet his conversations implied deep spiritual understanding.

After that first meeting, M. returned frequently. He continued the daily habit of journaling begun fifteen years earlier. The Gospel of Śrī Ramakrishna evolved from M.’s journal entries. There we are given an intimate look at the relationship of Guru and disciple.

Generally humble, M. was proud of his learning and position in life. Pride is a function of the ego, a great obstacle on the spiritual path. A Guru’s primary function is to destroy a disciple’s ego. Ramakrishna didn’t waste time getting to the source of M.’s ego. M. candidly relates his early conversations with Ramakrishna and the effects of those meetings on his ego. Following is an excerpt from one such conversation:

Ramakrishna: Tell me, now, what kind of person is your wife? Has she spiritual attributes, or is she under the power of ignorance?

M.: She is all right. But I am afraid she is ignorant.

Ramakrishna (with evident displeasure): And you are a man of knowledge!”

M. had yet to learn the distinction between knowledge and ignorance. Up to this time his conception had been that one got knowledge from books and schools. Later on he gave up this false concept. He was taught that to know God is knowledge, and not to know Him, ignorance. When Sri Ramakrishna exclaimed, “And you are a man of knowledge!” M.’s ego was badly shocked.

M. learned the spiritual definition of knowledge: “To know God is knowledge, and not to know Him, ignorance.”

As an educated man, M. was amazed by this assertion. His doubt pressed him to argue with the master. Ramakrishna, a man who could barely read and write, won that argument using simple terms and analogies. In a few moments, he showed that M.’s lifetime of study helped little to understand the subtle concepts of God.

M. notes that, “This was M.’s first argument with the Master, and happily his last.”

According to M.’s report, the first few meetings with Ramakrishna crushed his ego. This not only indicates his Guru’s power but also M.’s readiness to meet his Guru and follow his path.

M., The Disciple as Spiritual Scribe

Ramakrishna encouraged M. to return after those first meetings. For the next four and a half years, M. spent considerable time with his master. He kept a faithful record of each visit in his diaries, including dates, locations, and conversations. One meeting answered a question that deeply concerned him. That is, “How may a person caught in worldly life be freed from its chains?” This was Ramakrishna’s reply:

“From time to time he should live in the company of holy men, and from time to time go into solitude to meditate on God. Furthermore, he should practice discrimination and pray to God, ‘Give me faith and devotion.’ Once a person has faith he has achieved everything. There is nothing greater than faith.”

Following this advice, M. spent his work holidays and vacations with Ramakrishna. Those extended periods allowed time for intense spiritual practices. This is a great benefit to spiritual seekers.

M.’s relationship with Ramakrishna was fortuitous but short-lived. Ramakrishna died a few years later of throat cancer. However, M.’s dogged record-keeping held the master’s teachings close to his heart for the rest of his life.

After Ramakrishna’s death, M. transcribed his diary notes into the local language of Bengali. They were first published as individual volumes. Eventually, they were translated and consolidated into the book we know as The Gospel of Śrī Ramakrishna. Now considered a spiritual classic, it gives a rare account of disciples’ company with an enlightened master.

Ramakrishna’s influence had changed the direction of M’s life. From a man on the brink of suicide, he became one of the master’s most revered followers. After Ramakrishna’s passing, M. continued his career as school headmaster, dutifully serving his family and community. He often visited Ramakrishna’s wife, Sarada Devi, as well as Ramakrishna’s monastic disciples.

An illumined master like Śrī Ramakrishna attracts throngs of spiritual seekers. Some of them become enlightened through the master’s company and teachings. But few of them are noticed or known. Most lead quiet, modest roles. This might have suited the description of M.’s intent. When you open the hefty volume of The Gospel of Śrī Ramakrishna, you will notice its lack of authorship, no byline. It states, simply, “Originally recorded in Bengali by M., a disciple of the Master.”

The State of Master Mahashaya

Spiritual aspirants sought M.’s company after Ramakrishna’s passing. He was affectionately known as Master Mahashaya. Throughout the following fifty years, visitors reported that M. turned every conversation to Ramakrishna’s teachings. M. had effectively achieved the state of union with his Guru. It was not possible to see any division between the Guru and his disciple.