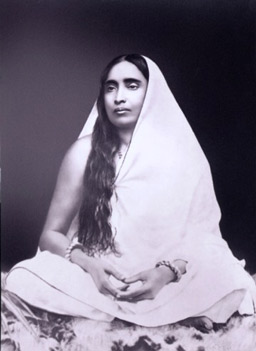 Śri Sarada Devi, known to her devotees as Holy Mother, was born in a tiny village in West Bengal, India, in 1853. She was the eldest daughter of a poor family. As was the custom in those days, young Sarada was betrothed when she was a child to the man who later became known as Śri Ramakrishna. Both were born into Brahmin families, the priest caste of the Hindu religion.

When Sarada Devi was eighteen she moved from her parent’s home to Dakshineshwar, where Ramakrisha was the priest to the local temple. By then, he was fully Self-realized, having spent many years in intense spiritual practices. He was well-known for his ecstatic spiritual state and was visited often by devotees. Sarada Devi was given spiritual instructions by Ramakrishna and spent the next fourteen years, often under great hardship, caring for her husband and his devotees.

Śri Sarada Devi is known for her simplicity, service, and deep spiritual wisdom. She received no formal education and did not write any books. However, much of her wisdom and advice was recorded by those drawn to her. Holy Mother’s unusual spiritual insight is evident in these recordings.

Examples of the Wisdom of Śri Sarada Devi

One of Śri Sarada Devi’s greatest contributions to the spiritual community is her example. A detailed report of her life can be found in Swami Nikhilananda’s excellent book Holy Mother: Being the Life of Sri Sarada Devi, Wife of Sri Ramakrishna and Helpmate in His Mission (aff link).

Studying a master’s life story is a very small part of keeping good company. Of much greater importance is reading, understanding, and assimilating the master’s teachings and making the teachings an integral part of your own being. It’s not necessary to grasp every subtlety of a master’s teaching initially; one’s attitude should include open-mindedness, a willingness to learn, and taking the time to consider and practice the teachings. Yoga is not an “armchair philosophy.” It should be practiced and experienced. This practice will make an indelible impression on your heart and mind. You will grow spiritually by leaps and bounds.

As practicing yogis, we meditate daily. Before your meditation, read and contemplate one of the above quotes or references for a few minutes. This activity will set the tone for your meditation and help turn your mind to the greatness that lies within.