Book Review: Holy Mother, Being the Life of Sri Sarada Devi, Wife of Sri Ramakrishna and Helpmate in His Mission 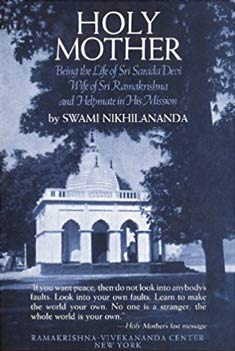 Modern Westerners would view Sarada Devi’s life as one of severe hardship. She was born into poverty and never escaped that condition. As the eldest daughter in a large family, she was consigned to hard work and service from an early age. And she was not immune to the sicknesses and diseases of the times.

Sarada Devi lived during the early days of photography. This book includes several images that give us a sense of her tiny stature and severe living conditions. It’s humbling to realize that a person can flourish spiritually in such conditions.

This book has been my companion for many years. Its pages are marked, dog-eared, and littered with sticky notes. I’m never disappointed when I turn to it for inspiration. It’s one of my favorite ways of keeping company with saints. I highly recommend Holy Mother, Being the Life of Sri Sarada Devi, Wife of Sri Ramakrishna and Helpmate in His Mission by Swami Nikhilananda (aff link). It is a historical record and rare example of a saint’s life, capable of inspiring all spiritual seekers.