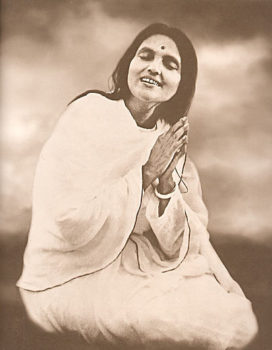 Keeping company with saints is one of the best ways to help us focus on our spiritual path. Saints help us realize Divinity within ourselves as well as others. They lift us up. We come to them with the desire for wealth, pleasure, and worldly gains. But saints demonstrate the true value of human life—an intimate relationship with God. Ānandamayī Mā was such a saint; just a few minutes in her company inspires us to be more like her.

Mā, the term of endearment used by her devotees, was born April 30, 1896 to religiously devout parents. This is a pattern that we see frequently in spiritual prodigies. According to reports, Mā’s father spent most of his time in spiritual practices. Her mother’s relatives were Hindu scholars and priests. As a small child, she enthusiastically joined in devotional activities.

Mā’s early life was typical for a young girl living in a tiny Indian village. She received very little formal education. According to custom, she was wed at thirteen, but stayed with her parents for another year. At fourteen, she moved to the home of her sister-in-law for traditional household education. Mā joined her husband when she was eighteen.

In Mā’s early adulthood, she experienced intense spiritual moods. Even without instruction, she was drawn to spiritual practices. Mā chanted Sanskrit mantras for hours, but otherwise never spoke. She avoided company and rarely ate.

Her unconventional behavior frightened some people. Her family feared that she was mentally ill, and a physician was consulted. He noticed that her behavior was like Śrī Ramakrishna, another famous mystic of the time. Her doctor declared her condition to be one of God-intoxication, not insanity. Later, his diagnosis was confirmed. Visitors experienced high spiritual states in her presence. And devotees reported miracles affected by her grace.

Ānandamayī Mā, Bliss-Permeated Mother, was the name given to her by an ardent devotee. Mā exuded the state of bliss. Her joy wasn’t dependent on her situation. Indeed, her surroundings and physical conditions were simple and poor.

Devotees from around the world were drawn to Ānandamayī Mā. In her presence, visitors experienced a true sense of holiness, Divine grace. Mundane desires were replaced with the desire to elevate one’s spirit and experience a bit of Mā’s bliss.

Biographer Alexander Lipski, an American professor, relates his experience in her presence:

“I had a feeling of utter contentment and peace—worldly problems were temporarily eclipsed. As though in the presence of a giant spiritual magnet my mind was engrossed in the Divine.” 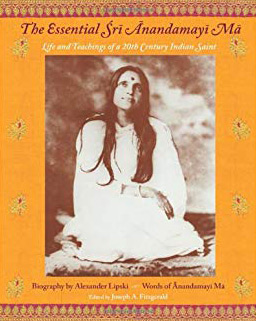 Divine intoxication was often evident in Ma’s behavior. On January 26, 1926, a special chanting session was being held in honor of the solar eclipse. The following is a report from one of her devotees:

“At one moment Mātājī’ (another name for Mā) was sitting like one of us. The next moment she had changed completely. Her body started swaying rhythmically…With her body still swaying, she stood up or rather was drawn upwards on her toes. It looked as if Mātājī had left her body which had become an instrument in the hands of an invisible power…She circled round the room as if wafted along by the wind. Occasionally, her body would start falling to the ground—but before it completed the movement it would regain its upright position, just like a wind-blown leaf which flutters toward the ground and then is uplifted and blown forward by a fresh gust of wind. It seemed her body had no weight or substance…Before the crowd had time to realize that she was in their midst, she fell to the ground from an upright position but did not appear to be hurt at all. Like a leaf in a whirlwind, her body started rolling at tremendous speed while she was lying prostrate…After a few moments, her body of its own accord stopped moving and Mātājī sat up. Now she was still like a statue…Her face was flushed and radiant and there was an effulgence all around her.”

Many such ecstatic states were reported by devotees. It’s tempting to believe that the spiritual heights of Ānandamayī Mā are impossible to reach. Yet Mā taught that experiencing the Divine within is possible for everyone. She always encouraged devotees to set aside time for devotional practices. Each aspirant experiences Divinity to the degree of his or her faith and dedication.

Ānandamayī Mā passed away in 1982 at the age of eighty-six. Because she lived so recently, many photos, videos, and recordings are available. We can hear her voice, see her demeanor, and get a sense of being in her presence. These resources make it much easier for us to relate to her. We can witness the rare appearance of a true bliss-permeated human being.

Mā was especially fond of chanting as a spiritual practice. In this video, you can hear her voice, see many famous photos of her, and get a sense for her primary teachings:

Keeping company with saints is one of the easiest and most effective ways to guide your own practice. All company affects us, but God-realized beings give us spiritual power and strength. They inspire us to put aside mundane activities and wishes and strive for permanent joy.

Quiet Karma regularly publishes articles on spiritual masters and the value of keeping good company. Please subscribe to get these and other articles on yoga and spirituality delivered directly to your inbox.