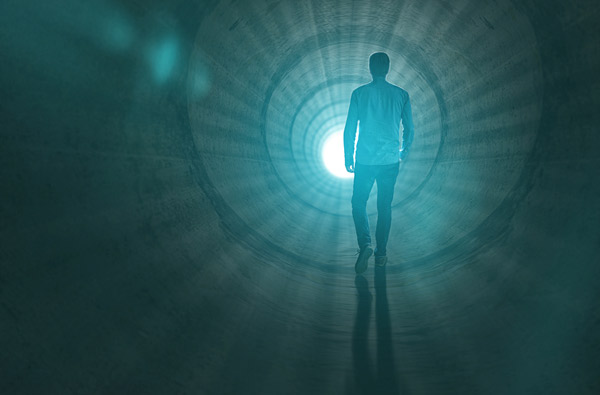 One of my favorite movies is the 1993 film Groundhog Day (aff link). This fictional story is based on an actual event held each February 2nd. Celebrations of Groundhog Day are held in Punxsutawney, Pennsylvania. If the day is sunny and clear, the groundhog emerges from its burrow and sees its shadow. This predicts another six weeks of winter.

The movie is about an arrogant TV weatherman, Phil Connors, tasked with reporting the event in Punxsutawney. An unexpected blizzard forces him to stay in town overnight. That’s when the story gets interesting. Phil awakens the next morning to discover the new day’s events are exactly the same as yesterday’s—Groundhog Day.

After several repeats, Phil realizes that he’s trapped in a time loop. If you haven’t seen it, I don’t want to spoil the movie for you. I’ll just point out that Phil is finally released from the repetitive cycle of Groundhog Day when he’s learned some life lessons.

Yogis appreciate the Groundhog Day movie because it illustrates the principle of saṁsāra. Saṁsāra is a repetitive cycle similar to Phil’s time loop. His saṁsāra was experienced as a single day.

You might have experienced cycles in your life too. Have you noticed yourself making the same mistakes again and again? Have you ever heard yourself say, “When am I ever going to learn?” That’s saṁsāra experienced in your own life. It’s like a recurring nightmare.

Yogis think of saṁsāra in a broader sense. It’s the cycle of birth and death that we endure over many lifetimes. And, just like Phil in Groundhog Day, we make the same mistakes again and again—until we learn and evolve.

Story of a Crazy Person Who Beats Himself Up

Yogic tradition uses stories to illustrate important principles. The Yoga Vasishtha (aff link) contains such stories throughout its lengthy volumes. The following is a summarized account from a dialog between the Guru Vasishtha and his disciple, Rama. Here, we learn about the principle of saṁsāra:

There was a great forest, so large that millions of square miles were like the space within an atom. In it, there was a person who had a thousand arms and limbs. He was forever restless. He had a mace in his hand with which he beat himself and, afraid of the beating, he ran away in panic. He fell into a blind well. He came out of it, again beat himself, and again ran away in panic, this time into a dense forest of thorny bush. He came out of the forest, again beat himself, and again ran away in panic. Then he ran into a banana grove. Though there was no other being to fear, he wept and cried aloud. He kept running as before, beating himself as before.

I witnessed all this intuitively and, restraining him for a moment, I asked, “Who are you?” But, he was sore and distressed and called me his enemy and wept aloud and then laughed aloud. Then he began to abandon his body—limb by limb.

Immediately after this, I saw another person running like the first one, beating himself, weeping and wailing. When I similarly restrained him, he began to abuse me and ran away intent on his own way of life. Like this, I came across several persons. Some listened to my words. Abandoning their previous way of life, they became enlightened. Some others ignored me or even held me in contempt. Others even refused to come out of the blind well or the dense forest.

Such is the great forest. No one finds a sure resting place in it, whatever mode of life they may adopt. They live their lives in ignorance and delusion.

This great forest is not far away, nor is that strange man in a strange land! This world itself is the forest. It is a great void; but this void is seen only in the light of inquiry. This light of inquiry is the ‘I’ in the parable.

The person with thousands of arms is the mind with countless manifestations. This mind punishes itself by its own latent desires and restlessly wanders in this world. The blind well in the story is hell, and the banana grove is heaven. The mind wanders into hell, then into heaven, and then into the world of human beings.

The dense forest of thorny bush is the life of a worldly man. The forest is filled with numerous mental attachments. Those attachments, to wife, children,  wealth, etc. cause untold suffering.

Even when the light of wisdom shines on the deluded mind, it foolishly rejects it, considering that wisdom its enemy. Then it weeps and wails in distress.

Behold the play of ignorance that makes one hurt oneself out of one’s own volition; and which makes one run hither and thither in meaningless panic! The light of Self-knowledge shines in every heart. Yet, one wanders in this world driven by ceaseless desires. The mind itself intensifies this sorrow and goads one to go round in circles. By its own whims and fancies, thoughts, and hopes, the mind binds itself. When it is visited by sorrow, it despairs and becomes restless.

The unenlightened mind causes the cycles of birth and death, saṁsāra. It is the source of suffering.

As you inquire into the nature of the mind, wisdom is born. Such a mind may even look at its own past notions with puzzlement. Just as the limbs of the person fell away, the latent desires of one who wisely renounces his notions also vanish from the mind. Then sorrow vanishes like mist at sunrise.

Your mind has arisen in the Supreme Being, just as a wave has arisen from the ocean. An enlightened mind realizes it is the ocean, the Absolute. Then it experiences supreme bliss.

Saṁsāra: The Cause and Cure

This story shows that your mind is the cause of suffering—the cycle of birth and death. You have the power to release yourself from saṁsāra.

Meditation is a form of inquiry. Meditate regularly. As you meditate, witness your thoughts. In time you’ll realize that you are not those thoughts. When that happens, the light of Self-knowledge shines from within.

The story above might seem odd or confusing at first. Its importance gains clarity and depth with repeated reading. Set a note in your calendar to review this story once a month. Reflect on how your thoughts and behavior might be like that crazy person.

How can you free yourself from the cycle of saṁsāra? What changes can you make in your thinking patterns and actions? Share your thoughts on saṁsāra in the comments below.