Sanskrit, The Language of Yoga 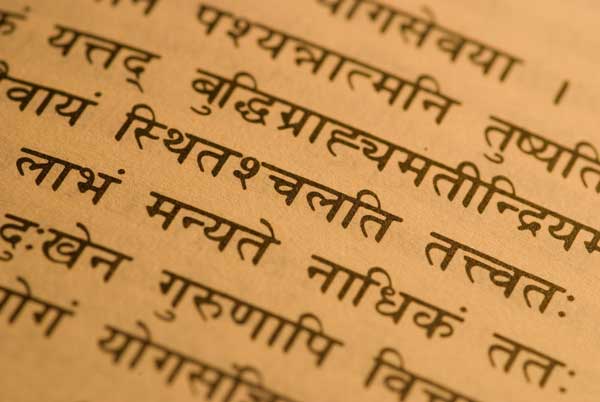 Sanskrit is the language of yoga.

All subjects of study have a language of their own. Sanskrit is the original language of yoga as well as many other philosophies and religions that originated in India.

Sanskrit is affectionately known as “the language of the gods” because of its spiritual influence. The recitation of Sanskrit mantras creates harmonious vibrations, bringing peace and tranquility to the mind. Sanskrit chants, sung with concentration and feeling, evoke a sense of indescribable Divine presence.

A Brief History of Sanskrit

Yogic practices and philosophies originated thousands of years ago, even predating the written word. Vedic teachings were passed down by oral tradition from teacher to student. Great care was given to precision and perfection.

Sanskrit is one of the ancient languages that forms the roots of many other languages of today. Not long ago, it was considered a dead language, no longer in common use. However, there has been some recent interest in its revival in India. Some communities in India consider Sanskrit to be their primary tongue. A few newspapers and magazines are being published in Sanskrit, and since 2002 Sanskrit composition contests have been held.

My Experience with Sanskrit

I originally heard the Sanskrit language during my first series of hatha yoga classes in Milwaukee, Wisconsin. An Indian teacher was a guest at our little class. In those days, the early 1970s, such visitors were rare. Though long ago and in a humble setting, I remember it as clearly as if it were yesterday. The sounds of the language gave me goose bumps, awakening something within that I didn’t know existed. It was so beautiful, clean, and deep. It was the beginning of a lifelong love affair with the language.

You might think my love of the Sanskrit language has made me a great scholar, able to speak and translate the great Indian texts. But that’s far from what actually developed. I realized, very early in my yoga studies, that I was more interested in the sounds and vibrations inherent in the language, and their effects, than in the study of its grammatical rules. A verse from Shankaracharya’s famous poem Bhaja Govindam supported my leaning:

Love the Lord, serve the Lord in your Guru’s dear form.
Don’t delay. Precious time is a-wasting.
When the servant of Death has his noose ‘round your neck,
Sanskrit grammar won’t aid your escaping.

Sanskrit is a difficult and complicated language to learn. It requires volumes of memorization and years of study. Even then, when a Sanskrit scholar pursues the translation and study of the ancient spiritual texts, a knowledge of the subject matter is just as important as technical knowledge of the language. You might think a Sanskrit dictionary or one of the online references or translation services would suffice.  However, you would soon discover that a single Sanskrit term can have many synonyms, causing confusion and misinterpretations. A simple, single-word translation is uncommon. Again, knowledge of the subject matter is crucial.

If you’re interested in Sanskrit for the beauty of its sound, its spiritual benefits, and the basic understanding of common words and phrases, I recommend that you learn to pronounce the alphabet properly. The best way to do this is by learning to read Devanagari, its traditional script. Having done so myself, I can tell you that it’s not difficult. The script is entirely phonetic, and once the characters are memorized along with proper pronunciation, you can read any word or phrase with a little effort and practice.

There’s a wealth of Sanskrit chants available online. Some of them are sung in a very traditional style. Others are more modern. If you sample several videos, you’re bound to find a musical style that sounds pleasant to your ears. Here’s one that I selected as a good introduction:

Transliteration changes Devanagari into the Roman characters that we recognize in our common writing today. Although many styles of transliteration have been proposed over the years, the most common is IATA (International Alphabet of Sanskrit Transliteration). The characters must still be memorized with their corresponding sounds, but it’s easier for most students.

Quiet Karma and the Use of Sanskrit

The subject of yoga can’t be separated from its original language. The word yoga itself is a Sanskrit term, as are many of the most common yogic terms, like guru, prana, or karma. Understanding yoga’s terms will greatly enhance your understanding of its principles and practices.

The Sanskrit terms used on Quiet Karma will always be defined in the glossary. Quiet Karma also offers a simple Sanskrit pronunciation chart, based on the International Alphabet of Sanskrit Transliteration (IAST).

Your Attitude Counts Most

Just as you don’t need to be a scholar of Aramaic or Latin to talk to Jesus, it’s not necessary to read, write, or speak Sanskrit to be a yogi. Treading a spiritual path requires a sincere heart—in any language. Knowing Sanskrit is not a requirement for meditation or enlightenment.

Forty years after my first exposure to Sanskrit, it’s still an integral part of my life. My favorite Sanskrit song, Śri Guru Gita, sung by Baba Muktananda, plays on my alarm clock beginning at 3:30 each morning. As I awaken, I sing along silently and translate as much as I am able. Throughout the day, I remember the Sanskrit mantra given to me by my Guru. That mantra is woven into each breath, and its automatic repetition is present in each step that I take.

It’s my hope that I can kindle an appreciation for Sanskrit in you. May you also experience the peace and joy inherent in the vibrations of the Sanskrit word.