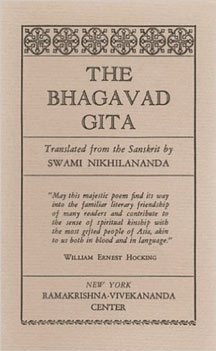 The Bhagavad Gita, translated from the Sanskrit by Swami Nikhilananda (aff link).

The Bhagavad Gita (aff link) often referred to as the Gita, is considered by some to be the Hindu Bible. It does, however, transcend religion and is a useful companion to all spiritual seekers. The Gita’s written form is believed to be more than 2,000 years old, and, like most Indian scriptures, oral transmission goes back to prerecorded times.

The Bhagavad Gita is deceptively short, only 18 chapters, but it’s packed with the sort of wisdom that takes a lifetime to learn and assimilate. The Gita is a poem found within the longest of the Indian epics, the Mahabharata, where the scene is set on a battlefield with two families about to engage in war. The characters of the Gita, Krishna and Arjuna, may be considered an allegory to the conflicts in our own minds. Many human questions and problems, along with their solutions, are offered in the Gita. It transcends time; although an ancient text, its principles are still applicable today.

These quotes from famous thinkers demonstrate how deeply the wisdom of the Bhagavad Gita has reached into Western culture:

“The Gita is the most systematic statement of spiritual evolution of endowing value to mankind. It is one of the most clear and comprehensive summaries of perennial philosophy ever revealed; hence its enduring value is subject not only to India but to all of humanity.” — Aldous Huxley

“I owed a magnificent day to the Bhagavad Gita. It was the first of books; it was as if an empire spoke to us, nothing small or unworthy, but large, serene, consistent, the voice of an old intelligence which in another age and climate had pondered and thus disposed of the same questions which exercise us.” — Ralph Waldo Emerson

“In the morning I bathe my intellect in the stupendous and cosmogonal philosophy of the Bhagavad Gita . . . in comparison with which our modern world and its literature seem puny and trivial.” — Henry David Thoreau

The Bhagavad Gita is an essential element to any Eastern philosopher’s library. It contains many familiar quotes to spiritual seekers. Here are a few of my personal favorites:

On peace and happiness:

“The man whose mind is not under his control has no Self-knowledge and no contemplation either. Without contemplation he can have no peace; and without peace, how can he have happiness?” (Bhagavad Gita 2:66)

“With the heart concentrated by yoga, viewing all things with equal regard, he beholds himself in all beings and all beings in himself.” (Bhagavad Gita 6:6)

Teachings in the Bhagavad Gita

The Gita is meant to be applied personally. Like the Bible, it should be studied throughout our lives. As we grow in wisdom, the advice of the Gita takes on more meaning.

The teachings contained in the Bhagavad Gita touch upon nearly every yogic concept. Many of those are also parts of other spiritual disciplines, including Buddhism and Christianity. In it you will find reference to various traditional spiritual paths: renunciation, selfless service, meditation, knowledge, and Divine love. The Gita also describes the state of the enlightened person.

The translation by Swami Nikhilananda is true to the Sanskrit and contains very little commentary. Nikhilananda’s introduction is a concise description of both the history of the Gita and its teachings—a perfect beginning for anyone interested in the spiritual principles of yoga.

This book is compact, fitting conveniently into places like a pocket or a purse, available for frequent reference. And because this version is so free from commentary, it’s a good companion to Gitas that have been translated by other scholars or saints, with or without commentaries.

No other Indian scripture so clearly and succinctly shows the way to spiritual enlightenment. The Bhagavad Gita (aff link) is so rich in teachings that you could use it as your only scriptural reference. However, my recommendation to most students is this: take one phrase, verse, or principle and apply it daily in your life, day after day. Days become years very quickly; you will discover that the teachings become an integral part of your personality. You will be that much closer to realizing the Divine within yourself.