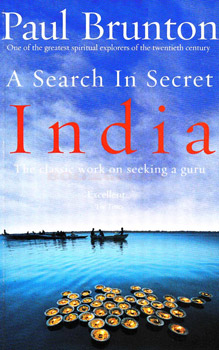 Normally we think of restlessness as an undesirable quality. Certainly, there’s no peace in it. However, restlessness for spiritual answers can produce the ultimate reward. This was the case with Paul Brunton. He spent years on the hot, dirty roads of India. A native to Great Britain, the weather had no small effect on him. His journey was sometimes delayed by illness. And he admits to the difficulties of travel and language barriers.

However, Brunton’s determination served him well. Wherever he went, whether bustling cities or tiny villages, he made inquiries with the local people. He sought adepts of any sect. By tagging along with the author, we meet a variety of spiritualists. Some of these self-professed yogis were practitioners of black magic. Many were charlatans, able to perform miracles. These “mystery-mongers,” as Brunton described them, made their living from the naïveté of unsuspecting tourists. But his discerning intellect recognized them quickly, and he moved on.

Brunton interviewed these authentic yogis extensively. He spent time with them, absorbing and recording their teachings. In the end, however, even the most sincere yogis came short of his heart’s search.

The author admits, throughout A Search in Secret India, his lack of faith in the unseen. Despite his good fortune of meeting many genuine yogis, Brunton remained skeptical. At one point, he notes, “…I have no desire to become the depository of another man’s doctrines; it is a living, first-hand, personal experience which I seek, a spiritual illumination entirely my own and not someone else’s.”

Early in his travels Brunton turned to southern India. He hadn’t planned to take that route at that time, but a strange turn of events guided him. There, in this remote area, he met the sage who would eventually make the most significant impression of his life, Ramana Maharishi.

At this first meeting, Brunton wasn’t yet ready to release his doubt and believe the saint’s words. After a few days’ visit he continued on his journey.

The Value of A Search in Secret India