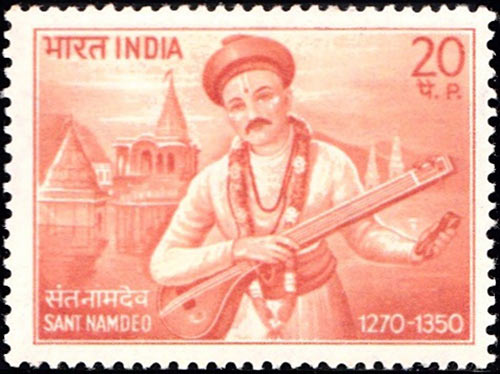 Master of the Month: Nāmdev.

Reading about the lives of saints is one way that we can learn important spiritual teachings. Stories about events in saints’ lives show us how to apply the lessons they learned to our own struggles. Saints lead by example, and to the degree that we are willing to learn, we follow their examples.

This month’s master is Nāmdev, a man who lived at the same time as Jñāneshvar. Nāmdev lived much longer than Jñāneshvar, and he is counted among the great devotional poet saints of that time. Both Nāmdev and Jñāneshvar composed in the local language. The common people, those not educated in Sanskrit and Vedic scriptures, found their verses easy to understand. Then they could apply the teachings to their daily lives. Similarly, when these poems are translated into our language, we can enjoy their messages.

From Sinner to Saint

Stories have been used for transferring knowledge and understanding throughout human evolution.  There are many colorful legends about Nāmdev. Examples of his life teach us how to apply spiritual principles to our own efforts. Some of the tales attributed to Nāmdev’s life seem fantastic and unbelievable. It’s helpful to remember their purpose—to grab our attention and make a lasting impression.

Unlike Jñāneshvar, Nāmdev was born into a lower caste. His father was a tailor, so we assume that he followed that profession. Nevertheless, Nāmdev had a doubtful beginning, like Milarepa’s. Nāmdev’s abhangas, devotional songs, confess to living a lawless life. In one song, he tells the story of his conversion to religion. He had visited a temple after murdering eighty-four soldiers. At the temple, he saw the grieving widow of one of his victims. Nāmdev was so taken with the widow’s grief that he resolved to lead a holy life. He spent the rest of his life in repentance and devotion to God.

Eventually, as the legend goes, the Lord was so taken with Nāmdev’s sincerity and love, that He became his friend. He visited Nāmdev and conversed with him frequently. 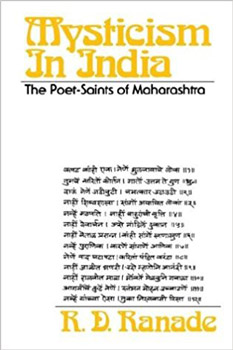 The Story of Namdev’s Humiliation

Making pilgrimage to spiritual centers is an ancient custom in India and is still practiced today. During certain times, devotees gather at these centers. There, they meditate, chant, and discuss spiritual principles with like-minded devotees. During Nāmdev’s time, and continuing even today, there was a pilgrimage to the holy city of Pandharpur. He went there to join the other great devotees, including Jñāneshvar, expecting to be greeted with great respect due to his friendship with the Lord. However, the saints ignored him, and he felt dejected. What a disappointment—no one acknowledged him!

One of the oldest saints of the congregation was a lowly potter named Gora. A potter will tap a pot to see if it’s fully baked. Gora walked up to Nāmdev, tapped him on the head and declared, “This pot is not yet fully baked!” He asked, “Who is your Guru?”

Nāmdev was incensed and replied that he didn’t need a Guru because the Lord was his friend.

Nāmdev left the assembly of saints, humiliated, because the others didn’t accept him into their group. Later he asked the Lord, “Why didn’t the others acknowledge me? And why did Gora the potter ask about my Guru? Should I need a Guru when you, the Lord, are my friend?”

The Lord explained: “Nāmdev, there’s nothing special about our friendship. I am a friend to all, dwelling in everyone’s heart.” He told Nāmdev where he could find his Guru, explaining that his Guru would show him how to experience the Lord in everyone.

Are You an Unbaked Pot?

Ego, in the sense of Eastern philosophy, is the quality of mind that makes us put our own interests above others. It always asks, “What about me?” or “What’s in it for me?” The ego is the force behind one-upmanship.

Pride and ego arise because of the mind’s tendency to want approval and recognition. As Nāmdev learned, pride always leads to humiliation. But we can avoid that pitfall by witnessing where pride takes seat in our own thoughts and actions. By the power of our spiritual practices, pride is recognized, dealt with, and dissolved.

Nāmdev became one of India’s most beloved saints. The stories from his life have entertained spiritual aspirants for more than eight hundred years. They have given us the inspiration to overcome that powerful adversary, the ego.

Do you have an interesting story of your own, about how you learned an important lesson about pride or ego? Please share it in the comments section.