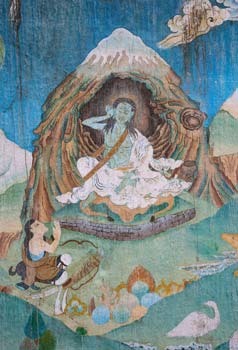 Upon the joyful news of his birth, Mila Sharab Gyalten named his newborn son Thopaga, “Delightful to Hear.” This name turned out to be fitting. The child would eventually become one of Tibet’s most beloved poet-saints, known for his beautiful singing voice and inspiring spiritual songs. Many of these poems survived the centuries and continue to delight and instruct spiritual seekers today.

The life story of Tibetan Buddhist Jetsun Milarepa is long and colorful. He was born into a prosperous family in 1052. When Milarepa was seven years old his father died, entrusting the family estate to greedy relatives who usurped the family business and property. Milarepa, his mother, and his sister were cast into severe poverty.

Upon his mother’s insistence, Milarepa left the family village to learn black magic in order to seek revenge against the relatives. He succeeded and returned to cast his evil spells. During a harvest celebration, Milarepa’s magic destroyed his relatives’ and their supporters’ properties. The entire community knew who was responsible. Milarepa’s reputation as a sorcerer continued throughout his life.

Milarepa’s mother was satisfied that vengeance had been served, but a growing guilt took over his own conscience. His belief in karma and the hereafter haunted him. He knew that no matter how justified he’d been in his great destructions, he would have to pay his karmic debt.

Redemption from such karmic debt may be attained with intense spiritual effort under the direct instruction of a master. Knowing this, Milarepa left his mother and sister and set out to find such a master. He was determined to take instruction from Marpa Lotsawa, also called Marpa the Translator. Marpa was a famous Buddhist sage with an impressive lineage.

Milarepa suffered many trials before being accepted by this lama who knew the extent of Milarepa’s karmic debt and the price of its release. Marpa instructed Milarepa to singlehandedly build and then destroy several houses. The last building, nine stories high, still stands today. When Marpa was at last satisfied that Milarepa had repented for his deeds of black magic and had paid his karmic debt, he taught him the traditional Buddhist secrets of enlightenment that he so craved.

From then on, Milarepa continued his spiritual practices in various caves in Tibet. He lived in unimaginable poverty, begging for food and subsisting on whatever nature provided. Illustrations of Milarepa often depict him with green skin because of his survival on nettles.

Although Milarepa achieved his goal of karmic freedom, he continued intense practices throughout his life. He chose a solitary life in caves and forests. Milarepa’s spiritual achievements attracted disciples whose love inspired them to preserve his songs and life story as an inspiration to future seekers.

Following is an excerpt from one of Milarepa’s songs: 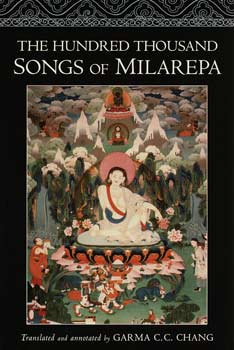 “Perseverance is the short road to freedom;

it is the necessary road to all holiness.

He who lacks it is bereft of hope.

A man must mount the steed of perseverance.

No one who has heard and deeply pondered

on the acquiring of merit by the practice of religion

can ever dispense with it.”

Learning a Master’s life story is a small part of keeping good company. Few of us are capable of the intense asceticism practiced by Milarepa. However, anyone can incorporate at least some part of the lessons he taught through his example and teachings.

Of much greater importance are reading, understanding, and assimilating a master’s teachings. Make them an integral part of your own being. It’s not necessary, initially, to grasp every subtlety of a teaching; one’s attitude should include open-mindedness, a willingness to learn, and taking the time to consider and practice.

Yoga is not an “armchair philosophy.” It should be practiced and experienced. This practice will make an indelible impression on your heart and mind. You will grow spiritually by leaps and bounds.