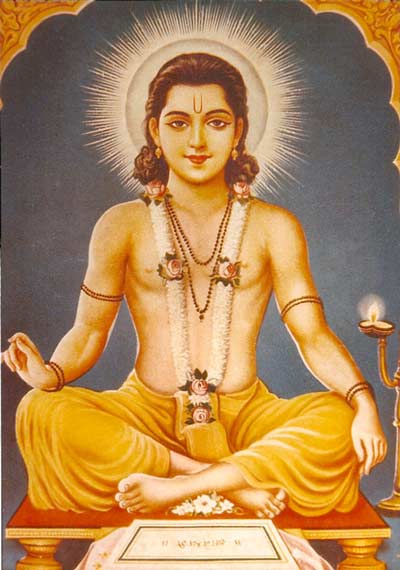 Every year thousands of pilgrims flock to Ālandi, the home of India’s most revered child saint. Jñāneshvar, also called Jñānadeva, lived more than seven hundred years ago, but his memory is secure in the minds of spiritual aspirants.

The story of Jñāneshvar’s life, from birth to the unusual circumstances of his death, is unforgettable. Religious scholars respect him as the author of several original texts. But the young saint’s main attraction is his emphasis on devotion—the love for God.

A Short History of Jñāneshvar’s Life

Born approximately 1275 A.D., Jñāneshvar (pronounced gyā-naysh-var) came into the world during a time of peace and prosperity. His homeland of Maharashtra State was still free from Arab invasion. This area has given birth to many saints of bhakti yoga, the path of devotion. Jñāneshvar was the second son of three and also had a younger sister. His parents, Vithalpant and Rukmini, were devout members of the brahmin caste.

Politics were favorable during that time. Still, Jñāneshvar’s family suffered an unusual fate. His parents, both religious devotees, separated before the children were born. Jñāneshvar’s father was overcome by his desire to renounce the world and follow the spiritual path. He tricked his wife to get her permission to leave. Then he joined an ashram. But when his Guru discovered that he had left his wife without support or children, he ordered Vithalpant to return to her.

Four children were born in due time. Each of them had signs of natural spiritual gifts. However, due to Vithalpant’s resignation of his religious vows, the entire family was ostracized. The pious townsfolk rejected them, forcing them to move outside the town.

Vithalpant begged the town’s leaders to forgive his mistake. Although some townsfolk were sympathetic, there was no guiding precedent in the religion. The family could not be accepted back into the community. Eventually, thinking that his death would bring atonement for his children, Vithalpant drowned himself in the river. Rukmini followed shortly thereafter.

Unfortunately, their parents’ death did not buy redemption for the children. Some leaders in the town suggested they seek help from the religious high council. The four little children traveled together to meet the high council, but their mission was unsuccessful. Then their luck began to change. One of the priests, as a mockery to Jñāneshvar, challenged him. He suggested that Jñāneshvar should make the buffalo recite scriptures. Only then would the priests accept the children’s purity. As you might guess, the buffalo did just that. The priests of the high council could no longer deny that Jñāneshvar and his siblings were spiritually accomplished.

When the children returned to their hometown, their reputation preceded them. They were heartily accepted and honored. That is, except for one famous sage, Chāṅgadeva. This sage was a hatha yogi and was said to have exceptional powers. By yogic practices, he had averted death many times. He was rumored to be more than 1400 years old. He was also full of pride because of his powers, and he had many disciples. Chāṅgadeva meant to challenge the children’s superiority. However, he quickly discovered that their spiritual attainments far surpassed his own. He renounced his path and became the first disciple of Jñāneshvar’s sister, Muktabai.

The Living Samadhi of Jñāneshvar

At the young age of twenty-one, Jñāneshvar declared his intention to renounce the world in a unique manner. Living samadhi is when a saint enters complete meditative absorption in the Self. His body remains alive, but it is entombed forever. At the auspicious time, a great ceremony is held, and a stone is moved to close the grave.

Jñāneshvar’s tomb remained undisturbed except for one brief instance. The tomb was opened to sever a root that had grown around his neck. Having done so, the tomb was again closed. Ever since Jñāneshvar’s samadhi, festivals have been held to celebrate this great saint.

The Great Works of Jñāneshvar

Colorful stories are enough to pique our interest in unusual people. Miracles and legends keep us interested. But stories are not enough to keep a memory alive for centuries.

During his short life, Jñāneshvar composed several philosophical works. Literature and teachings become accessible to everyone when a common language is used. Knowing this, Jñāneshvar produced his works in his native language, Marathi.

Jñāneshvar was very young for producing works containing such depth of knowledge. Only personal experience and Divine inspiration can account for his writings. The most notable of these is Jñāneshvari. Jñāneshvari is an enlightened commentary of the Bhagavad Gita. Scholars believe Jñāneshvar was in his mid-teens when he composed it.

Other texts composed by Jñāneshvar include Amritanubhava—the nectar of inner experience. Jñāneshvar composed this work at the instruction his Guru. It describes his spiritual experiences and philosophy.

Jñāneshvari (aff link) is essential reading for an in-depth study of the Bhagavad Gita. The best English translation of Jñāneshvari was done by V.G. Pradhān, edited by H.M. Lambert.

Be sure to start with the preface and introduction of this book. It will give you a greater understanding of its background. In this translation each verse from the Bhagavad Gita is followed by several verses of Jñāneshvar’s commentary. Below is a sampling of what you can expect from this important work: 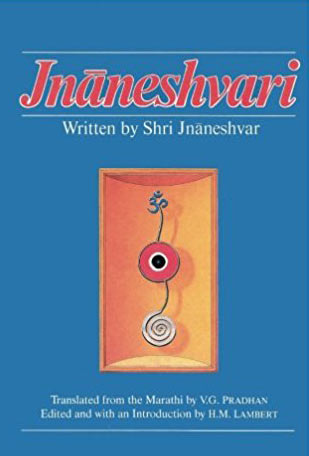 Let the aspirant gain tranquility little by little by means of reason controlled by steadiness and having fixed the mind on the Self, let him not think of anything else. Whatsoever makes the wavering and unsteady mind wander away let him restrain and bring it back to the control of the Self alone.

If reason, supported by steadfastness, slowly leads the mind by the pathway of Self-realization to the temple of the Self, and installs it there, this is one way of attaining to the Self; consider this, but should it be found impracticable, there is still another easy method; listen.

A vow should be taken to adhere to a resolute determination and not to depart from it. If by this means the mind can be steadied, then the work will be easy. If not, it may be allowed to move freely. Then, wherever it goes, the resolution will bring it back, and the steadiness will be restored.

A Rare and Special Offering

My Guru, Svāmī Gurupremānanda, wrote and published an extensive correspondence course on yoga. One of the lessons gives a lovely, detailed account of Jñāneshvar’s life. Svāmī Gurupremānanda has offered this lesson to Quiet Karma’s readers. To get your copy, please send a request through the contact form, and I will deliver it to you via email. More information about the full correspondence course is available upon request.

Making pilgrimages to holy sites is a traditional spiritual practice. But it’s not practical for most of us. The greatest pilgrimage you can take is seeking Truth within your own self. As a seeker, you need not go any further than your own home to keep company with the greatest masters of the past. Always have a book on hand to help you walk with saints and sages. In the process, you will become one of them.