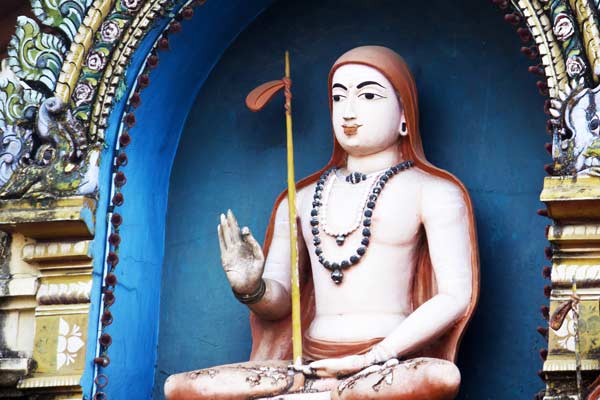 Saint, poet, philosopher—and reformer. These words all describe a young man born in 686 A.D. Few others have made the far-reaching influence of Shankara. Without knowing, you might also be following his teachings.

Shankara was born in Southern India. His early life resembles Jñāneshvar’s in many ways. Shankara’s parents were of the Brahmin caste, and his father died when he was quite young. He was a spiritual prodigy, learning the ancient Vedas by the time he was ten years old.

Even as a child, Shankara wasn’t satisfied with mere book knowledge. He sought a deeper experience of religious teachings. Shankara begged his mother’s permission to become a monk. She refused to give her blessing, but he was determined. A captivating legend tells the story of how Shankara eventually got his mother’s consent.

Once, when mother and son were near a river, Shankara went for a swim. Suddenly, a crocodile seized the boy’s leg and began to pull him down. Shankara shouted for assistance as his mother watched helplessly. The situation seemed hopeless. Shankara cried out to his mother, pleading that he should be allowed to die as a monk. In her pitiful state, she granted permission. At that moment, the crocodile released Shankara. He returned to the riverbank without injury. His mother rejoiced, and Shankara was free to become a monk.

Shankara became a student of Govinda. This Guru initiated Shankara into the secrets and practices of yoga. Shankara was a zealous student. He progressed and achieved spiritual perfection quickly. Govinda then sent Shankara, still a teenager, out to teach. At an age when most people haven’t yet taken their first steps on the spiritual path, Shankara had become a leader.

The Philosophy of Non-Dualism: Advaita Vedanta

Shankara’s deep spiritual insights inspired him. He founded and taught the system of Advaita Vedanta. This doctrine affirms non-dualism—God alone exists. This was Shankara’s conviction. His spiritual experiences confirmed his belief. He taught that the purpose of human birth is to know this truth.

Shankara set out to teach throughout the Indian continent, 8,800 miles long and 4,000 wide. Try to imagine the trials experienced by this young man walking alone, subjected to the elements and wildlife! During his travels, he taught non-dualism with the spiritual power of one who truly knows. Shankara’s philosophy won many converts. He formed four monasteries, one in each part of India—all survive to this day.

Shankara was a prolific author. He composed his first poem shortly after his father’s death. Following is an excerpt of “The Shattering of Illusion” from Moha Mudgaram:

Behold the folly of Man;
In childhood busy with his toys,
In youth bewitched by love,
In old age, bowed down with cares.
And always unmindful of the Lord!
The hours fly by, the seasons roll, life ebbs away;
But the breeze of hope blows continually in his heart.

Many original works, poems, and prayers are known to be Shankara’s. He also produced inspired commentaries on the Brahma Sutra (aff link), Upanishads, and Bhagavad Gita.

Some scholars believe that certain works attributed to Shankara are not his. These disputes aren’t our concern. The works in question are purely Advaita Vedantic. If not authored by Shankara himself, then they are surely authored by disciples in his lineage.

The following works are credited to Shankara. They are very good introductions to his teachings:

Putting it into Practice

Legends and stories inspire us and help us remember a saint’s life. But the real value of keeping company with saints is putting their teachings into practice. Shankara’s philosophy is pervasive to Eastern thought. You might be familiar with his teachings but unaware of the source. And you might already be practicing some of his precepts. Following are some examples from Aparokṣanbhūti:

“The steps to enlightenment are described as follows: control of the senses (yama), control of the mind (niyama), renunciation, silence, space, time, posture, the restraining root (Mulabandha), balance of the body, firmness of vision, control of the vital forces, the withdrawal of the mind (pratyahara), concentration (dharana), self-contemplation (dhyana), and complete absorption.”

Shankara was born to a mission. From his youth, he sought to clarify the teachings of the Vedas. This task required unusual spiritual insights. He also sought to organize India’s many philosophical systems. Having accomplished these goals, Shankara died at the age of thirty-two. He left his monasteries in the able hands of qualified disciples.

Swami Muktananda, who learned Vedanta as a youth, speaks often and warmly of Ādi Shaṇkarāchārya. This quote is a fitting end to this introduction:

“Even after having written so voluminously, Shaṇkarāchārya said in the end, ‘Here is the gist of all the scriptures in half a verse: Your inner Self is the Lord Himself, the Supreme Being Himself, and never forget this. The realization of this truth is the only worthwhile goal of life.’”