Advice for Yogis Who Are Sheltered in Place, Part II 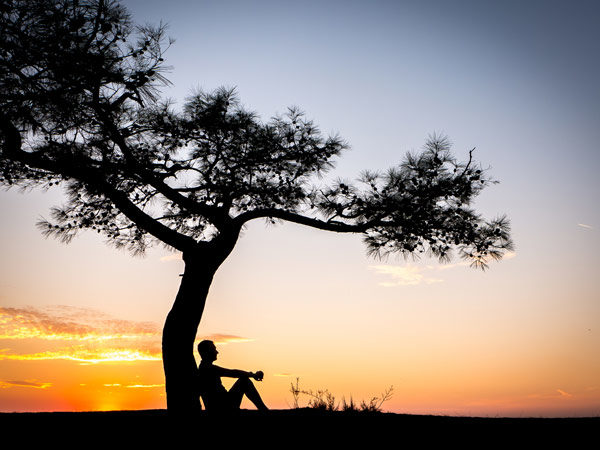 Under the Wish-fulfilling Tree.

We all daydream a little. Our minds are always making up stories. But did you ever let your mind roam freely and then find yourself in a place you didn’t want to be? Perhaps you imagined a conversation gone badly. Or maybe a mental misadventure that felt more like a waking-state nightmare.

When that happens to me, I stop myself and ask, “How did I get here? What initiated this stupid thought?” Then I review the mental steps in reverse that led me to the unpleasant scenario. I see that the imagined story was unreal, and the speculation was unfounded. Surely I could be doing better things with my mental energy!

You probably already know where I’m going with this. As I write, our community is in lockdown due to the coronavirus. Shelter-in-place has kept us home and away from normal activities. This situation will pass, and we’ll eventually be better for it. In the meantime, we can stay calm and count our blessings.

One thing we can do for mental peace is prevent our thoughts from becoming living nightmares. This reminds me of a story often told by Swami Muktananda, whose followers affectionately know him as Baba. Baba is the Guru of my own Guru. He was a prolific writer and a great storyteller. The story I’m sharing today is one of his favorites from Indian lore.

This story illustrates how a person’s mind can run out of control and lead to destruction. It’s an especially important lesson for us during this time because we’re subjected to so much information—and misinformation. If we don’t keep our imaginings in check, we’ll surely cause unnecessary mental anguish.

The story takes place in India, known for its extreme equatorial temperatures. There, shade trees are highly valued for their cool respite from the heat. In fact, trees are so treasured that some are said to have supernatural powers. Such a tree is called kalpavriksha—a wish-fulfilling tree. If you happen to find shelter under such a tree and begin to daydream, all your dreams will come true. This could be very good—or very bad! Here’s the story:

Once upon a time a wandering drifter came across a spreading tree on the side of the road. Exhausted from his travels, the man was pleased to find relief from the heat of the day. He rested in its shade. After a while, he thought, This is nice, but it would be even better if I had a bungalow to live in.

Remember, he had taken shelter under a wish-fulfilling tree. The moment the thought formed in his mind, a beautiful cottage appeared. Delighted, he entered it and looked around. It was furnished comfortably, and cool breezes flowed through its windows.

By then, the drifter was feeling hungry, and he thought, This place is perfect—but how much better if it offered some good food to eat.

No sooner had the thought passed through his mind that a feast on golden plates appeared on tables surrounding him. The aroma of the food overwhelmed him and spawned more desires. The man wished for fine wines to accompany his meal. Drink and delicacies continued to appear even as he relished them. He happily ate and drank to his fill.

Soon, the wanderer began to think, This is great, but I wish I could have a beautiful woman to share all this wealth. As you might expect, a lovely maiden appeared.

However, then the man’s mind took an unfortunate turn. He thought, This woman must be a ghost because as soon as I thought of her she appeared. If she’s a ghost, she must have come to eat me!

And, because all thoughts materialize under a wish-fulfilling tree, that’s exactly what happened.

The Wishing Tree of Our Minds

In a way, we’re all living under a wish-fulfilling tree—right now. That’s because we have a mind, and our minds have tremendous power. The mind has the power to create and to destroy. It’s responsible for the experience of both our joys and sorrows.

We create our worlds, inner and outer, by our thoughts. So how do we create a world that gives us only peace and joy?

Baba, the master mentioned earlier, responds to this question:

You should think good thoughts. You should think that God is within you. With this faith you should pass your days in happiness and bliss. What is the point of becoming dejected and falling into despair or weeping for no reason? You shouldn’t imagine ghosts, you should imagine much better things.

The situation we’re faced with today could create many negative thoughts and emotions. But negativity need not rule our minds. The instant we notice an unpleasant thought roaming about, we can stop it. And then we can replace it with something positive. We have the innate power, and we can use it.

Please add a positive note in the comments below. Let’s uplift each other with some good news, a funny anecdote, or a newly discovered silver lining.